Verrasztó Dávid: “I want to prove front of the home crowd!”

Verrasztó Dávid is one of the most talented swimmers of Hungary. He has gold from the European Chapionship, he has World Championship gold medal and he had an incredible season last year up until Rio, where his results did not meet the expectations.

Verraszto wants to prove this year and the World Chamiponship in Budapest is the perfect place to do so.  The Hungarian swimmer won a silver in Kazan 2015 in the 400 m mixed, but in Rio he only finished 12th. Now he wants to prove that the performance in Rio was a so called blooper, and he can achieve more with the help of the home crowd in the super high-tech arena built specially for this event. 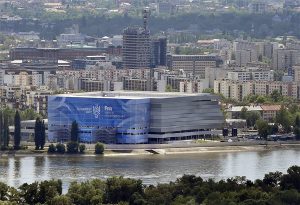 Verrasztó and all the swimmers from the Hungarian national team already tried the arena, and they all loved it. The swimmer said that this is one of the most impressive facilities he ever seen and tried. He added that they would probably “move out” for the last month in order to get them back in the atmosphere of the World Cup.

Verrasztó when asked about his goals in this years World Chamiponship front of the home crowed said:

“It’s simple, I want to go out of my way, and I want to prove to myself that what happened in Rio was a slight mistake, that I can make up here in Budapest.”

The 17th FINA World Aquatics Championship in Budapest and Balatonfüred will be held from the 14th to the 30th of July, competitions will be broadcast by M4 Sport.

There are no upcoming events at this time.